My Very Own Veggie Garden

Despite the fact that I am not a huge veggie eater, there are a few we eat and having in the yard is pretty handy.

Since I have had my own house, I have always had 1 tomato plant, because nothing beats a toasted tomato sandwich except perhaps one with bacon!

The only other garden fresh veggie we enjoy are potatoes.  We eat them with most every meal.  Mom and dad plant a large garden and I just go over and scoff a basket when we need them.

Once we moved to this house, we talked about planting our own garden, but we don't have a great location for one...mostly because of the dog.

Last year, I decided to forgo plants in my front flower bed and plant 4 tomato plants.
THEY DID GREAT!  I am the only one that will eat them.  It gave me plenty to put in the freezer to chop up for spaghetti sauce.

On a side note....super easy to do this.  I just washed them, cut out the core, chopped them in 4 and threw them in a freezer bag, skins and all.  THEN, when I want them for my sauce, I put them out for about 10 minutes and take out as many as I want.  Run them under some warm water and the skins just peel off.   EASY PEASY!  Try it yourself this year if you have some extra.

This year, we decided to expand the veggies in the front flower bed. 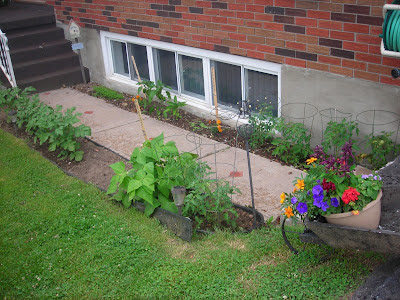 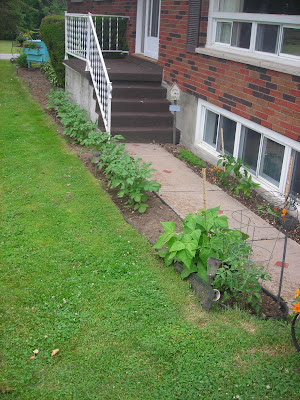 Because I got to planting a little later then most people, I tried to pick tomatoes and peppers with some already started or at the very least...flowers.

Lastly, here are the beans...Hayden's beans actually.  He planted them over a month ago after bring some home from Grampa's. 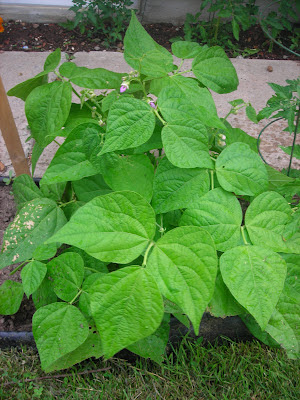 It is doing SO well, it's a bit ahead of mom and dad's, despite being planted a day or so later.  Also considering he had no supervision to plant them....he had them put in before I even knew where!

He and I have an agreement.  I will eat his beans if he eats my potatoes. I don't really like beans but I will live up to my promise. He says he is going to eat them too, but I have my doubts!  Time will tell...probably in another few weeks for sure...the flowers are just starting to die off!

So, there you have it...a tour of my very own veggie garden.  I'll keep you updated on the harvest AND my bean/potato challenge!