Ok, I gotta kind of admit that this isn't really a non-scale victory necessarily, but I just REALLY wanted to join the link up today and didn't want to bore you with the same old "I worked out all week and ate well" kind of crap I can usually come up with.

This non-scale victory is about daring to dream!

I have a secret confession about a sport I want to participate in.....are you ready? 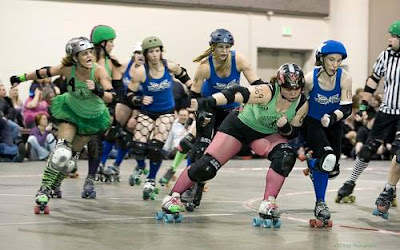 Yup!  Roller derby!!  There is a woman's league in Peterborough and there is this little part of me that so badly wants to join!

When I mentioned this to my hubby, he gave me that sideways glance and reminded me of my ice skating fiasco where I didn't even get half way around the rink, never letting go of my death grip on the boards, except for the instances where I was holding on to him.  To this day, I am pretty sure his left arm is now a bit longer than the right.

I tried reason with him and stated that I was pretty sure that 4 wheels would be easier to balance on than a 1/2" thin strip of metal blade would be, but he was not convinced!

Their website says you do not need to know how to skate, just need the required equipment.  How bad ass would I look out there?


From the video, it totally looks manageable.  I mean, looks like they need blockers and my mother used to joke that I was built like a brick shit house and who can mess with that?  AND in regards to my hubby's concern of not being able to get around the rink due to my splendid skating abilities (or lack there of), you just grab onto the shirt of your opponent and they pull you around!
I think it would be super awesome...and for now, I will put it on the back burner, but I haven't given up yet.  I might try and make it out to a game sometime and see it in person!
Here is how you find the link up, join in or at least check it out!
﻿