I wanted to share a little story from today.  For those of you on my personal Facebook, you have already read about it, but I also needed to vent my frustrations a little bit too.

I live in a small village of about 500 people.  It's a quaint little place and I feel very lucky to be raising my children here.  It's a place where I feel safe letting them walk to school, to a friend's house or outside playing without me needing to be there for every second of that time.

We built a new house attached to my parents house to be closer to them.  While located on a main road, we are situated beside a church that only sees people on Sundays.  My daughter, Abby (who is 5 1/2) thinks it's the perfect spot to ride her bike and I agree.  At our other house, there was no sidewalk, no paved shoulders to the roads and people who neglected to pay attention to the stop sign.  Her favorite thing though was to ride her scooter along the edge to the stop sign and back.  She would do this from 7:00 am until dark if we let her.

Now that we are have moved, she now likes to ride her bike along the shoulder of the road, which runs along my parent's front yard to the church drive way.  The driveway itself is a large circular driveway with so much space.  Having assessed the risks of being close to the main road, I still felt it was ok for her to do this unsupervised.  She is a smart one and knows to stay off the road itself.  She has been doing this alone for the past 3 days.  She basically rides down our driveway, along the side, around the church and back home.  It has been completely uneventful....until this morning.

My dad walked the kids to school this morning and on his way home, he was stopped by a police officer.  The officer explained that there had been a complaint called in about a child, around the age of 4, riding her bike on the road at 7:20 this morning.  Yup!   My child is 5 and has had the cops called on her.  My dad went in to see my mom and told her "Abby's in trouble this time...like REAL trouble!"

My mom called me at work to let me know.  I was stunned to say the least.  I wasn't upset about the person being concerned, but about their approach to it.  I am not a person that comes off as stand-offish or unapproachable.  It's a small neighbourhood and should I suspect one of my neighbours, I know which one is on the top of my list...if it was a stranger...well, I hope they at least waited to call until they were no longer behind the wheel of the car!

Here is the route in question: 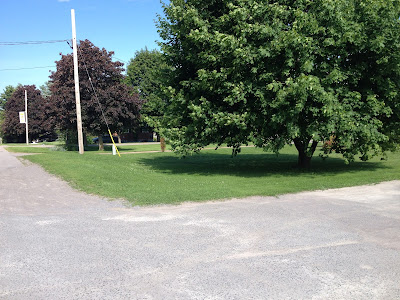 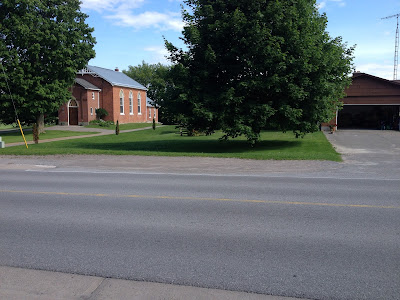 I roughly measured it out tonight....approximately 55 feet across with about 4.5 feet of paved shoulder for her to ride on.  So, when I got home, I had to sit and explain to her that someone saw her, got concerned and the police came by to say someone saw her and were worried about her safety.  I also explained that instead of taking the side of the road, she would have to push her bike across the grass to the church.  Needless to say, tonight she did not want to play outside or ride her bike.

See, here is the trouble...I know people say it a lot....we need to go back to letting our kids play, but for people like me, who do that...there are others who don't agree and apparently feel the best way to deal with by calling authorities.

For now, I will keep an eye on her a bit closer and then once she gets comfortable again, I will let her be on her own.  She just loves to be out there, playing away with babies and her imagination!

What do you think?  Was I in the wrong or did this person act a bit to rash? Would you let your child ride this route? 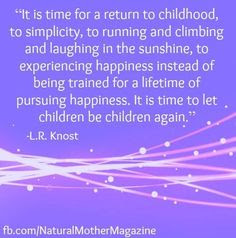