I LOVE This Product!

Sometimes you come across a product that you love so much you want to shout it from the roof tops!

I was first introduced to this product a few months ago and I bought one to see if it performed like the claims.

I was hesitant to believe it, but in the end, I was pleasantly surprised and since that time, I have told MANY people about it and purchased 4 more.

What is this product you ask?

Well, it's a Tupperware product.  Firstly, let me say....I am a SUCKER for those home parties....I get a glimmer in my eye when I see a new product catalogue and mentally wish I was a millionaire so I could buy at least one of everything in the book.  Secondly, this is not your mother's Tupperware.   No longer is it shades of avocado green and pumpkin orange.  It's lime greens and pinks and purples....very purdie!  It's called a FridgeSmart.

I originally just bought a small one to see if the claims were true.  At the party, the rep said that fresh mushrooms would last about 2-3 weeks in the fridge while in this container.  Now, if you have ever bought fresh mushrooms, you know they have a shelf life of about 3 minutes.  I didn't end up trying them first, in fact, I used it for strawberries first, which coincidentally also have a shelf life of about 3 minutes.  After about 2 days of being in the container, I pulled them out for the first time to cut some up.  I wasn't sure when I pulled off the lid, they looked a little soft.  Upon further inspection though, they were still nice and firm.  Same thing a few days later.  In the end, I managed to go through a whole pack of strawberries without them going bad.

My next test was grapes.  I filled it up and left them.  I had more to use first.  After about a week and a bit, I pulled out the container.  Still firm and fresh!  My parents were over about 4 days later for dinner and I was telling my mom how wonderful this product was and that I was so excited because they actually were on sale!  I pulled out the container and made her feel them AND eat them.  My dad wondered what the hoopla was all about and I gave him the same spiel.  I made him try a grape (I think it was the first one he has ever had....probably his last too)...I may or may not have said
"see how great they look dad?  Not like wizened old butt holes!"  ( you totally get what I mean....they always look a little wrinkly around the stem, plus I had to sell my dad on them....nobody wants wizened old butt holes!

So, I have given you my story on them, would you like to see them now? 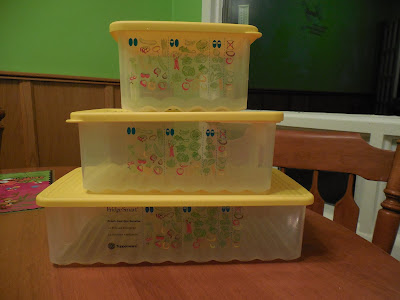 I have 3 different sizes...small, medium and medium long.  There is a large, but it is only available when you buy the set of them.  You can see a chart like picture on the sides of them.  This tells you how much ventilation particular veggies like. You adjust the air flow on the containers depending on what you have stored in them. 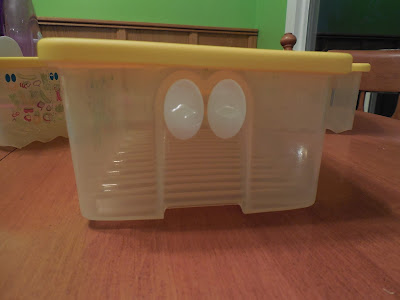 Each container has 2 "nostrils" and you open and close them according to the instructions and produce type.

Let me show you what I have stored in mine. 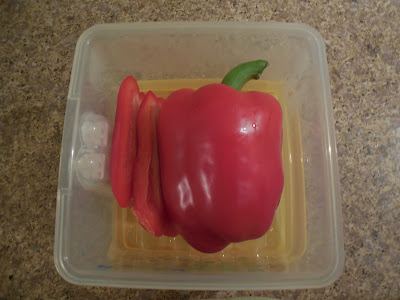 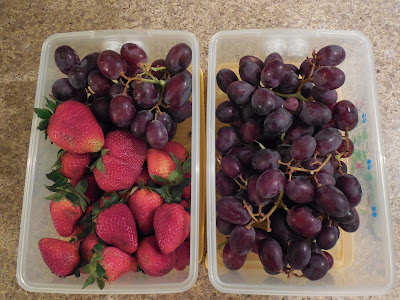 I have 2 medium ones and right now they are holding one container of strawberries and a bag of grapes.  They both need both nostrils closed.  Because they both require the same ventilation, they can be mixed together.
﻿ 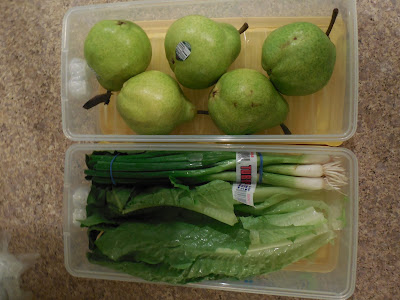 I also have 2 medium long ones.  I have 5 pears in one and the other is holding a head of romaine lettuce ( I did rip off the base and outer leaves) and a bunch of green onions.  Again, these guys all like 1 nostril open and can share space.  My hubby likes his pears hard and they will keep firm enough for him to get him through for lunches until next Thursday.
﻿ 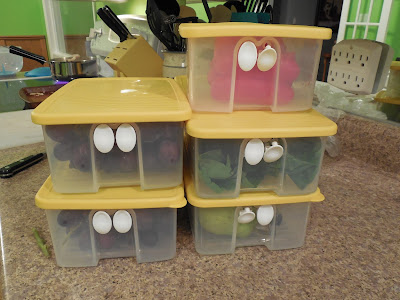 Here they are...all ready for the fridge.   You can see on the right that there is a nostril open on the containers.  You now just put these on your shelves and free up your crisper for other stuff.  I have milk in one and my grapefruit in the other.
I hosted a Tupperware party a few weeks ago and convinced at least 3 other people to buy them.

They are a bit costly to get started and require a bit of work to store your produce in (because you have to package them up in them) but it's worth it.  For me, I shop every 2 weeks and before I had my FridgeSmarts, my produce would barely last one week, let alone 2.  I now tend to run out of produce before it spoils.  So, in the end, this produce is saving me money by decreasing waste.

If there is one product you are looking to add to your cupboard, this should be at the top of the list!
*I do not sell Tupperware NOR am I getting anything for this post.....I just love the product*﻿
Posted by Unknown at 9:36 PM